AAI Denali Prep Course. How Much is Too Much Snow?

I just got back from a Denali Prep trip.  These trips are usually a lot of fun and often make for some great photography.  This trip however got a bit old.  Not really the trip so much as the weather.  There is only so much time you can spend in a tent without going crazy.   For this trip that number is three days.  Of course we were forced to get out of our tents every now and then to dig out snow so we did not get buried.

The hike in consisted of dragging heavy sleds to a camp near the base of Table mountain near the Mt. Baker Ski Area.  This is great Denali training since Denali consists of dragging heavy sleds through the snow.  Once there we built a camp. Building a camp is a key Denali skill.  We created tent platforms and built walls around the camp so wind would not crush our tents.  Wind however was not going to be an issue on this trip.

After cooking dinner it was tent time.  I was looking forward to this since I have a one month old child at home, and there was nothing that would wake me up here in the mountains...  At some point in the middle of the night I woke to the side of the tent pressing against me and realized I was being buried alive by constant snow fall that had been falling since I put the tent up.  So much for uninterrupted sleep.  I got my boots on and dug the tent out.  Perfect Denali training!

Morning came, and it sure seemed a little dark, even for 6am.   Once again I am buried.  I tunneled my way out of the tent, this time with the camera and shot this. 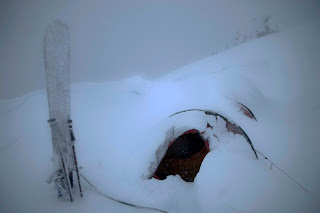 Due to the very heavy snowfall we decided to not move our camp today and just work on camp mantinence since it looked like it would be an all day job.

I spent most of the day in the tent and the rest of it digging. 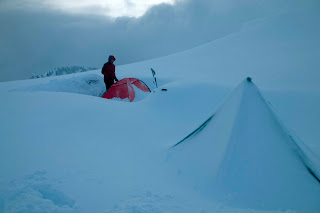 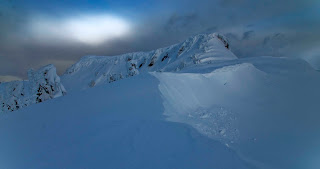 Another day of heavy snowfall so we continued to dig camp.  The next morning. 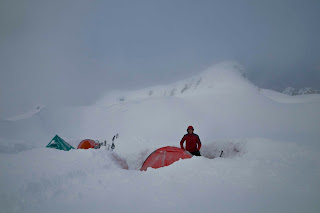 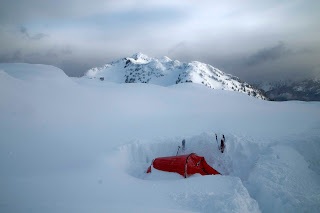 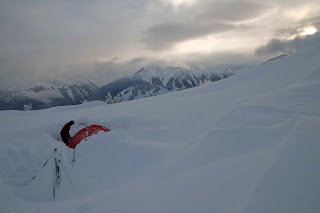 We now estimated that we had 3 meters of snow.  If the wind picked up we would have no chance of digging out our tents.  It was time to leave.  That however was easier said than done.  Moving in snow that deep is very difficult and very tiring.  There was also a real threat of avalanche.

It was still snowing hard as we made out way out and I shot this. 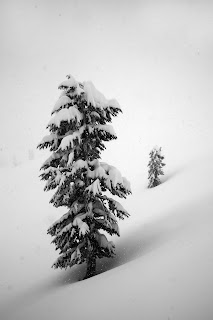 After hours of wading though sometimes chest deep snow we made it to the ski area and were able to move down the groomed run to the car.  45 minutes of digging later, the car moved and we were on our way back to Bellingham to learn the technical skills needed for Denali.