Avalanches at 14k Camp on Denali.

Just got back from my second Denali trip of the season.  Here is a video of some photos I shot of an avalanche running through camp at 14k.  The news has just been released that there was four climbers from Japan killed in an avalanche on Motorcycle hill just a few hours after I shot these photos.  I have never seen such unstable snow conditions on Denali as I did on this trip and the video below shows just one of the many avalanches we witnessed over a 48 hour period.


Lots of new snow and very high winds created very unstable snow conditions over much of the mountain.  This made it too dangerous for us to continue up the mountain, and just as dangerous to go down.  We were stuck at 14,000ft camp for several days waiting for the conditions to improve.  During this time several other parties were either climbing or descending the fixed lines.  Two of these groups were caught in separate avalanches.  One group of three was caught just below the fixed lines and lost much of their gear and sustained numerous puncture wounds.  The other party was caught just above camp and sustained relatively minor injuries.  The decision to move higher or lower on the mountain is often a difficult one, but in the conditions that we observed there was no disagreement that our group would not be moving until conditions stabilized.  When conditions were safe for us to descend we had only one meal left, and we were forced to abandon our cache of gear and food higher on the mountain due to safety concerns.  Luckily our cache will almost certainly be removed from the mountain by another American Alpine Institute group later this week.

The photo below is looking back toward Motorcycle hill, and clearly shows the debris and crown from the avalanche which is now believed to have killed 4 climbers.  Upon deciding to leave camp at 14,000ft we had heard from a group at 11,000ft camp that the hill had avalanched in the night and therefore was safe for us to  descend.  At that point no one knew that the avalanche was human triggered and underneath the debris were 4 climbers.

More details of the accident can be found here: Anchorage Daily News. 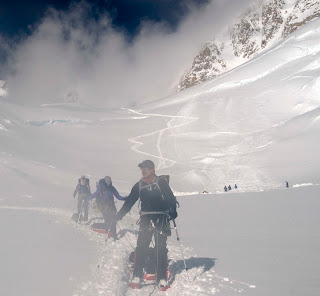 Posted by Alasdair Turner Photography at 11:19 AM