Many people come to Antarctica in the hope of seeing wildlife.  The vast majority of Antarctica has no wildlife.  McMurdo has some, but it is not exactly teeming.  There is a grand total of five species of terrestrial animal that one has a chance of seeing and none of them  are really terrestrial since they all depend on the ocean.  After the sea ice melts then it is possible that various types of sea life will be spotted, but that only comes near the very end of the season when most people are either too busy unloading the cargo ships or have already gone home.
My job allowed me to see quite a bit of wildlife since I work on the sea ice which is where most of the animals spend their time.

By far the most common wild life seen by anyone on station is the skua.  Skua are a large seabird that looks a lot like a big grey seagull.  They are both hunters and scavengers and very intelligent.  It is not uncommon to see one swoop down from the roof of the cafeteria and knock a tray of food out of the hands of an unsuspecting resident heading back to their dorm.  They are smart enough to know the difference between a tray of chicken and a tray of veggies, and the owner of the tray of chicken should beware.  Even though McMurdo provides easy scavenging, their primary food source is fish.  They come to McMurdo to breed and like most birds they breed in an area with few predators and plentiful food.  Their only predators in the Ross Sea region is themselves and they have been know to eat their own eggs and even their own young.  Due to the ocean being frozen their main source of food(fish) is not available.  They instead feed on the placenta of pupping weddell seals and eggs and young of adelie penguins.  The largest nesting sites are located directly adjacent to the largest penguin rookeries.


While most of the McMurdo population looks at these birds as a nuisance, I came to enjoy them.  This bird nests farther south than any other bird.  They spend the Austral winter off the coasts of North America making their annual migration up there with one of the longest of any birds.  They are rarely seen in North Amercia because they are primarily a sea bird. 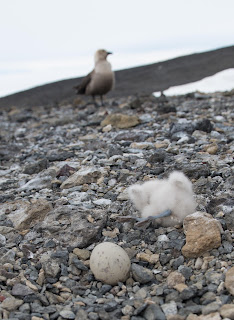 It is important to note that my photos of these birds were shot from a long way off and the photos of the birds attacking me were shot when working directly with science groups, or when walking on open trails near McMurdo Station.  As soon as the birds showed aggressive behavior I left the area immediately.  The photos of the nestling were shot with a telephoto lens and at no point did the parent bird react to my presence.   In other words:  No birds were harmed in the making of these photos.

The emperor penguin is the most iconic of the antarctic species.  Luckily for most McMurdo residents they are fairly common.  Groups of them wander around the sea ice close to station.  They are curious birds and therefore anyone working on the sea ice within sight of an emperor is likely to be visited.  On their feet they are clumsy and awkward but they do seem to be able to travel reasonably quickly.

In the water they are an amazing animal that swims incredibly fast and can dive to depths that are difficult to imagine.  One was recorded at over 500 meters under water.  They spend large amounts of time out of the water.  There is no food out of the water so they do not eat for very long periods.  This includes almost the entire winter for the male birds. 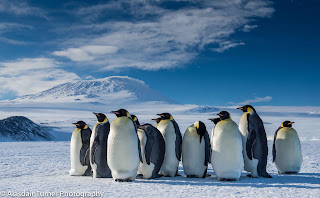 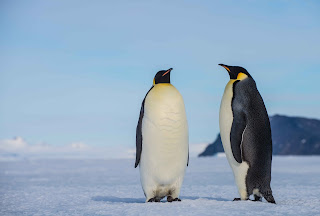 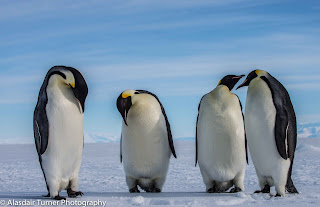 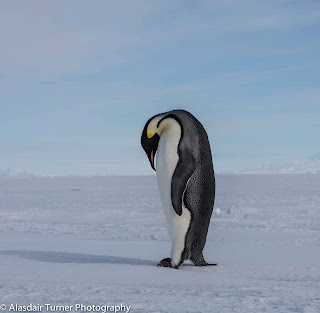 If the emperor penguin is the statesman of the antarctic the adelie penguin is the jester.  Adelies are smaller than the emperor and seem to walk around the ice with no rhyme nor reason to their travel.   Like the emperors they are curious and will come and investigate anyone working on the ice.

Weddell Seals
There are many Weddell seals all around the sea ice surrounding McMurdo Station.   The seals can be found at cracks in the ice, where they work to keep holes open by chewing on the ice.    Many of the seal holes have blood around them from the males who guard their holes from other males.  It is not uncommon to see bloodied male seals outside the holes covered in snow having not appeared to move for many hours.  These seals are exhausted from fighting for their holes.   As soon as they are rested they return to the water to continue to guard the hole.  From this blog post it might be easy to get the idea that we are walking next to the seals every day but this is not the case.  My job did not bring me close to the seals that often, mostly because we are encouraged to stay away so we do not disturb them. Most of the time the seals are just a dark spot on the ice in the distance, occasionally my job brought me close enough to shoot some nice photos. 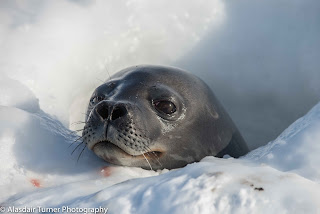 The final animal that one might see on Ross Island is the snow petrel.  It is a beautiful white bird that I never managed to get any where close to.  I saw them once and the photo was not good, but here it is.

Once again it is important to note that all of the photos I have here were shot while working directly with science groups, or while doing my job.  The Antarctic treaty states that people may not change the normal behavior of animals in any way unless there is a scientific purpose.