Yesterday I went out to install a camera on a golden eagle nest. There were two chicks and a mother bird sitting in the nest when I rappelled down to the nest. Unfortunately I was not able to get a shot of the momma bird sitting in the nest due to an extremely agitated rattlesnake who I was trying to get past on the way to the nest. Once I got to the nest the two chicks did not present themselves as very good photo subjects, but I did manage to get a couple of photos. 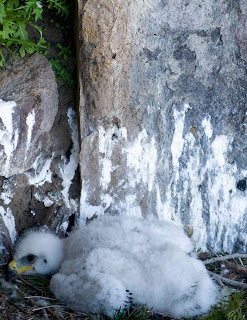 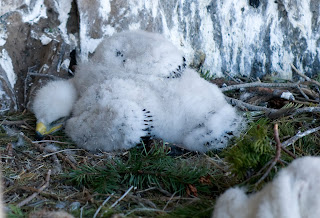 This is the camera set up to look at the nest. Working at golden eagle nests is very difficult due to the location which is often at the base of small overhanging rock areas. This was the second nest I tried to get to, the first one failed due to a large loose block that I was not willing to try and climb past. 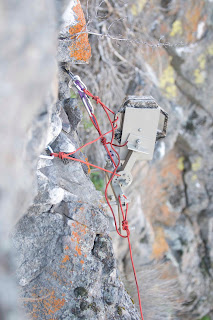 Posted by Alasdair Turner at 9:21 AM