This last weekend I climbed the NW Face of Forbidden Peak. It was my most enjoyable climb this year due both to the terrain and the good friends I spent the weekend with. I will post more comments about the photos later. 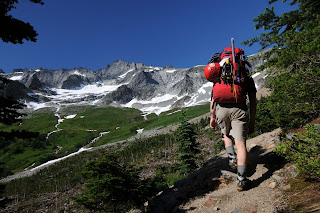 The hike in to Boston Basin is always enjoyable, despite the steep overgrown trail. Once above treeline the views are amazing. Our objective, Forbidden Peak can be seen in the center of the photo. 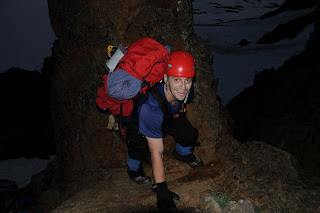 We stopped along the way and made dinner since we had a long way to go the first night. After that we continued over Sharkfin Col and dropped down onto the Boston Glacier and our camp right at dark. 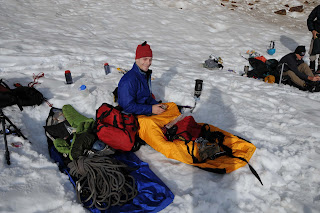 Our bivy site on the Boston Glacier. 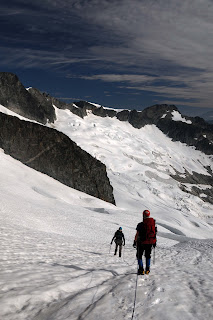 A lazy start to the day got us moving about 8am and heading for the base of the north ridge where we could cross over to the Forbidden Glacier where our route starts. 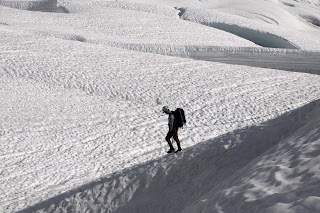 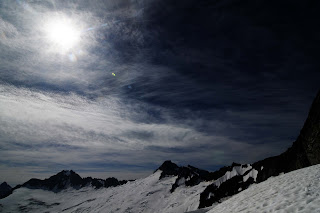 Looking back across the Boston Glacier toward Mt. Buckner, and Boston Peak. 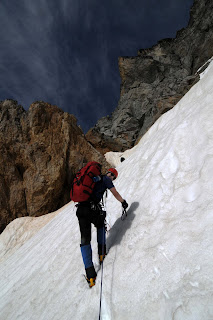 The notch at the base of the north ridge was not expected to be an issue, however due to receding glaciers it looks like it is going to be an issue as the years go on. Most reports I have seen about this part of the route talk about a simple snow gully. 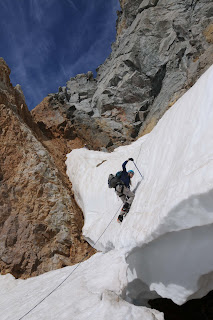 Instead of a snow gully we started with a step across a moat on a barely there snow bridge(which Barry managed to break before I could use it. Thanks dude), followed by a steep climb up a short steep snow section. 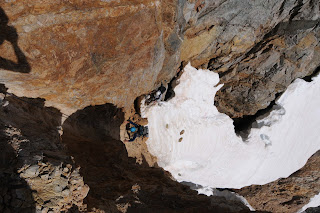 Next, was an 80 degree loose dirt gully (crampons required) to gain the notch. Leading this was fairly serious as a fall here would be bad since there is no way to protect dirt. That is unless you climb in Scotland in the winter where the only good protection is frozen dirt. In this photo I am looking down the gully at Degay and Pat. 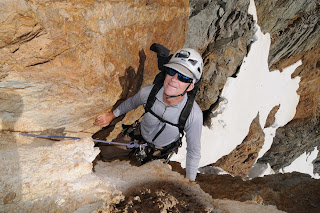 Pat at the top of the dirt gully. 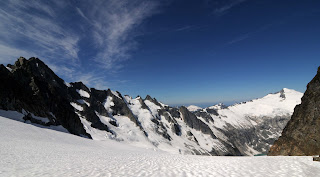 At least the going looked easy on the other side. 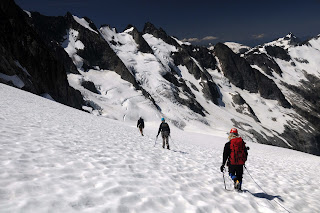 Now we were on the Forbidden Glacier and we could at least see our objective ridge. Getting to the ridge however was not as easy as we thought it might be. Route finding through crevasses on a steep part of the glacier made for a couple dead ends. 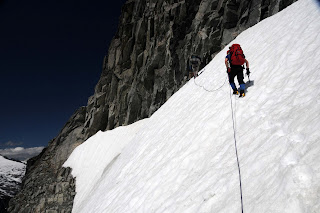 After messing around for a bit we did manage to find a snow finger that lead directly to the rock and was not blocked by a moat. 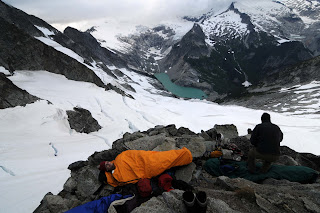 Our next worry was if we would find a place to sleep once we were on the rock. We had heard that there was some places to bivy on the route, but from below it did not look promising. Luckily we found a site big enough for three of us. Degay slept in a second site just below. From the site we had a great veiw of Eldorado Peak and Morain Lake below us. 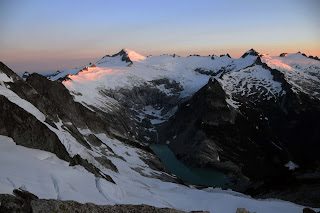 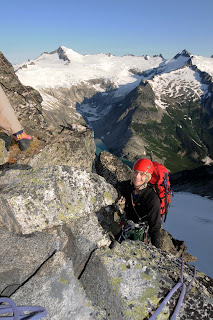 The climb itself was abosolutly stellar. The rock was great, and the climbing was enjoyable. 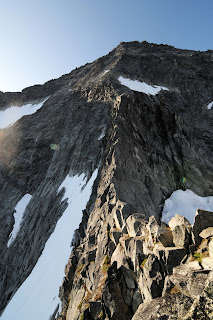 This shot shows all of the ridge from the knife edge traverse to the summit. The crux of the route lies just on the other side of the knife edge ridge. The chimney mentioned in Beckey's book was beyond the actual crux of the route one pitch below. The crux was full on 5.8 climbing made harder by the fact that I did not worry too much about going light on this trip carrying two camera lenses and a tripod in addition to several other luxury items. 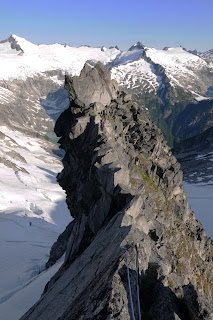 Looking back across the knife edge ridge at Barry. The crux of the route came just after this pitch. 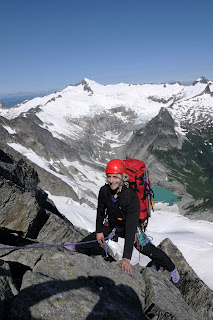 Once through the chimney the cimbing eases considerably and you are treated to some amazing pitches of low fifth class climbing on perfect rock. 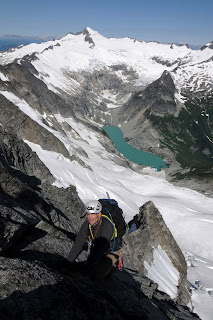 Pat climbing into the belay with Eldorado Peak in the background. 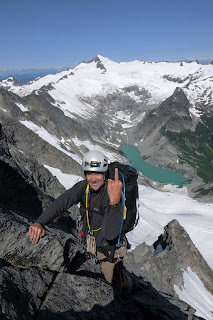 Pat is getting a little sick of me and my new camera lens. 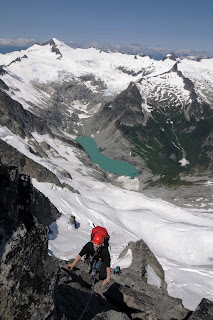 Barry looking down the entire ridge from near the top. 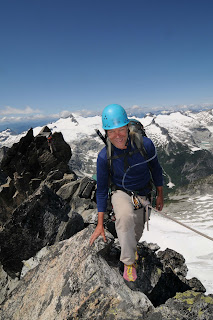 Degay on the summit.

This route was one of the better routes I have done in the Cascades. Although not technically difficult the whole package makes for a serious outing. There are two ways to approach this route. One is to rap off the West Ridge Col and descend to the base of the ridge. We decided not do go this way due to the seriousness of rapping off the ridge in the unknown below. It is a quicker way to go than our route, but it misses many of the things that made this trip so enjoyable.

Most of the photos in this trip report were shot with a new lens. I have previously been shooting most of my alpine trips with a Nikon 18-200mm VR Lens

which makes for a very good all around lens. On this trip I decided to bring a second wide angle lens which I bought just a few weeks ago. I was very impressed with the lens and love many of the photos I shot with it on this trip. It is a Tokina 11-16mm Lens

I will add a blog post in the next couple of weeks entirely devoted to photos I have shot with the new lens.
Posted by Alasdair Turner at 10:02 PM