For the second year in a row I spent some time working with Washington Department of Fish and Wildlife on a Golden Eagle project.  This work mostly consists of going to eagle nests just after the young birds have fledged and picking out all of the remains of prey that the birds have brought back to the young.  Golden Eagles nest mostly on cliffs and that is where I come in.  Most of the nests are accessed by rappelling from above down to the nest.  Occasionally there is no place to anchor above the nest or it is easier to climb to the nest.

Earlier this year we placed a trail camera on a nest with some young birds in it. The first part of this work was to retrieve that camera and collect any prey remains that were left in that nest.  Right when we got to the nest a juvenile bird flew over.  It is quite common for the juvenile birds to stay around the nest for a while after they fledge.


We collected prey remains and the camera and headed to the Wenas wildlife area to spend the night.  This area is one of the hidden gems of Washington.  I was amazed by the amount of birds in this area.   Unfortunately a very noisy great horned owl kept waking me up throughout the night.  I can't really complain since being woken up by an owl is a lot better than being woken up by my neighbors at home.


The next morning we headed the the next nest just south of Ellensburg.  This nest was in a beautiful area and despite a little bit of rain and a few ticks the half mile walk was very enjoyable.  There was no sign of the birds when we got close to the nest, but after rappelling to the nest it was clear it had been used that year.  The nest  contained several coyote legs and deer legs.  As we were driving the road out of the wildlife area we saw a juvenile golden eagle, but I was not able to get a shot of it.  I was able to get a shot of this deer that was a hundred yards down the road from where we saw the eagle. 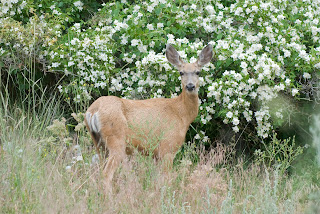 We made one quick stop to shoot some osprey before we got to Ellensburg. 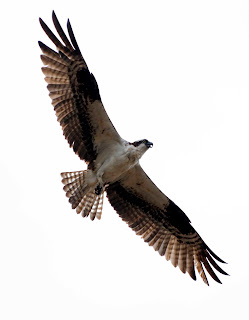 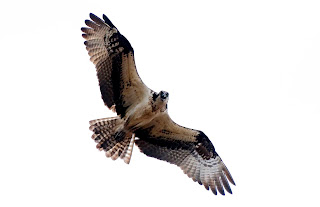 From there we headed to a nest south of Ellensburg close to Puget Sound Energy's wind farm (also known as bird killing area).  After what seemed like several hours of driving on must be Washington's single worst road we arrived at the most unique area of Washington I have been to so far.  The top of this high ridge was mostly rock and sand with the only vegetation being some desert plants and cactus that I did not know exist in Washington.

The young bird had still not left the nest, so we could not go to the nest to collect remains.  Instead we spent a few minutes shooting photos and then left. 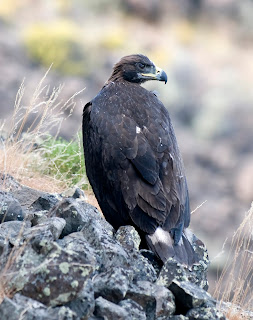 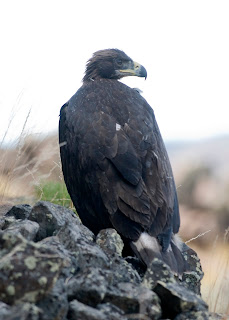 On the way back down the "road from hell", we stopped to check out a coyote carcass and found another interesting Washington species...


Driving past the windfarms I shot this photo.  I guess they haven't killed him yet.


From there we headed north to Wenatchee to return to a nest we did last year.  From a climbing standpoint this nest is probably the most interesting.  It  is located on a small basalt cliff that if you look at the wrong way might just collapse and kill you.  I think this cliff would win the medal for most unstable rock in Washington.  There are also not anchors above the cliff so rappelling to it is not an option.  I climbed along a small ledge and through a constriction (covered in mouse crap) to get to the nest.


From there we headed north to Twist and Winthrop to look at some more nests.  One of the nests was located up a very steep slope a long way from the road so we decided to skip it an continue on to the next.  At the next nest in the Metow Valley west of Winthrop  there was still a juvenile bird.  We were planning on tagging that bird the next day with a radio tracking device to gather more information on the movements of the birds.  On the way back we stopped at a tree nest in Entiat and collected some prey remains below the nest.  After that we headed back to Twisp for the night.

The following day we headed to the Cheif Joseph Damn to meet with some folks from the Army Corp of Engineers who would take us by boat to a nest just upstream on the Columbia River.  We visited a different nest from the same birds last year.  They biologist for the area had told us that he had not seen any birds since they had fledged a few weeks earlier.

We found the carcass of the bird that had fledged in the bushes below the nest (apparently the victim of a coyote).  I found a second carcass of a very small bird on a ledge just below the nest.  That bird was likely pushed out of the nest by the other one.  For the second year in a row it appears this nest failed to produce any young.  The nest however had more prey remains than any other nest that we had been to so far.


We were supposed to capture and tag the eagle at the last remaining nest, but when we got there the bird had fledged and was nowhere to be seen. We collected the prey remains from the nest, and headed home.
Posted by Alasdair Turner at 10:58 PM