I just got back from a climb of Forbidden Peaks north ridge with Mountain Madness.  I have been wanting to climb this ridge for over 10 years and after looking down it after my west ridge climb a few weeks ago it was more on my list of things to do than ever.  I got a call on Wednesday asking if I was interested in working a north ridge climb and I jumped a the chance.
The north ridge is not one to be taken lightly.  Just getting to the ridge can feel like a climb in itself since it involves a climb up loose rock and a rappel down the other side of sharkfin col, followed by a walk across a big glacier, and then another climb over a ridge on the other side of the glacier.
We spent the night at the base of Sharkfin Col with the intention of climbing over will full packs and then spending the night somewhere on either the north or west ridge (our descent route).  We woke up the next morning at 5 am and made the quick decision to go for the whole thing in a day and leave our camp at Sharkfin Col. 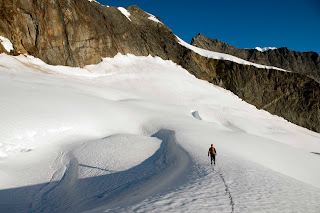 The north ridge col is located at the lowest point in the ridge on the far west side of the Boston Glacier.  Many people miss this and go up one col too early (south).  This also works but requires a rappel or two on the other side.  I did not like the look of the standard crossing due to a large chunk of snow that needs to fall off, so we climbed up the col just to the south of the standard one.  After we got there we made one rappel and I changed my mind about the route variation choice.  We climbed back up the col and reassessed our situation.    We were planning on climbing the NW facing snow slope that takes you to the north ridge, but after having a better look at the complete north ridge I decided we might as well just start climbing from where we were.

I was very worried about time, since we were not carrying any bivy gear, and although spending the night on the ridge would not have killed us, it would have been a very uncomfortable night.  I figured we really needed to be at the summit between 12 and 1 to get down at a reasonable time, and right now (9:30) we were quite a bit behind that time.  I put the camera away and we got serious.  We climbed the ridge with a few short pitches and a whole lot of moving together on whatever terrain looked to be the easiest.  We bypassed a couple of steep snow sections by downclimbing around them on relatively easy ground.  The climbing was easy, and very enjoyable.  After an hour of climbing we had made it to the snow crest where the NW variation usually joins the ridge.

The NW facing snow slope that gains the ridge does so at a point where the ridge builds up a lot of snow over the winter.  There were still some cornices on this ridge so we had to traverse the slope lower down where it was a bit steeper.  We did three full pitches on firm snow with picket anchors.  It was now time to relax a little since I was sure we could make it off the peak before dark.


The upper part of the ridge was amazing.  Super fun and easy climbing.

Opps,  I forgot to shoot a photo of us on the summit.  Someone else did, so when he emails them to us I will post them.

Much to my surprise we were the first party on the summit, followed shortly after by another guided party.  It was 1:00.  We were soon warned of the large number of parties heading up the west ridge.  We took a short break on the summit and started down.  We down climbed and made 3 rappels on the descent to the top of the gully.


We also passed 4 parties still heading up.  At the top of the gully was a large group of people who had decided to turn around and were trying to figure out how to rappel (or something like that, I don't really know what they were doing).  We walked past them and headed directly to the first rappel station on the right of the gully.  After a little route finding and several raps we made the final rap to the snow below the gully and were surprised to find that were also the first group off the peak.  We decided not to camp at Sharkfin col where all our overnight gear was, so we dropped a pack and ran up and retrieved our gear cached there.   At 7 pm we rolled into the lower Boston Basin camp and started cooking a very needed dinner.  It would be somewhere around 2am before the final group on Forbidden passed our tent heading back to camp.

All in all this was one of the best alpine routes I have done in the Cascades.  It has everything.  It is never difficult, but its length, remoteness and variety make it quite serious.  It is a route I highly recommend, however only to experienced parties of very competent climbers.

Posted by Alasdair Turner at 10:03 PM