Skua are one of the four commonly seen wildlife species around McMurdo Station, and almost certainly the least loved.  Residents of McMurdo learn quickly to hide their food from these birds since they have learned to recognize the blue cafeteria trays that contain easy meals.  It is not uncommon to see a unsuspecting victims tray be knocked out of their hands by a skua and then have the remains stolen from the ground.

Here a skua takes off with christmas dinner (lobster tail). 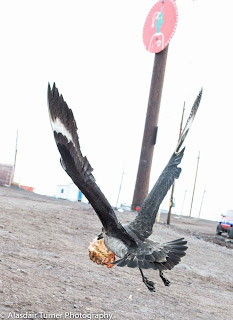 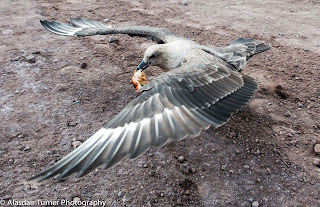 Skua are very territorial and hiking around McMurdos minimal trail system is at some point likely to put you face to face with an angry skua.  Skua are also very common at Cape Royds and nest along side the adelie penguin colony.

This skua took exception to me having a walk on the Hut Point trail late one evening.  I was divebombed several times before I was able to move on and get out of the way. 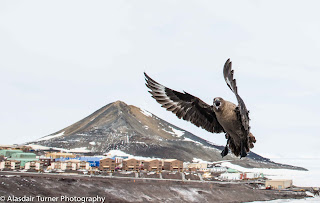 The skua at Cape Royds seemed to be even more aggressive still, but this is likely because they were protecting nests.  I captured two photos of this one (with a wide angle lens) as it came within just a few inches of my head while visiting the penguin colony. 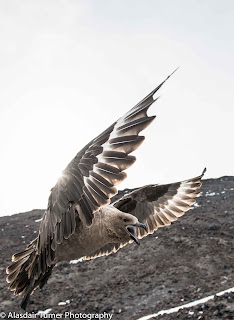 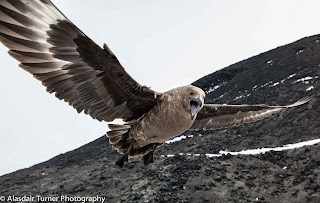 Unlike most people at McMurdo, I find the skua an amazing bird.  They spend half of their time off the coast of North America as far north as the Aleutian Islands, and then head south to breed in Antarctica. They feed mostly on fish in the open ocean but take to scavenging fairly well.  They are the southernmost nesting bird in the world and one has even been seen at the South Pole Station.  I spent a little time watching some nesting birds.  There were five nests that I knew of around McMurdo Station. Three of the five produced young birds and the other two failed.  Skua have a reputation of eating their own young and preying on the young of other birds, but I did not see this type of behavior in them.

Here a mother sits with her chick in the nest. 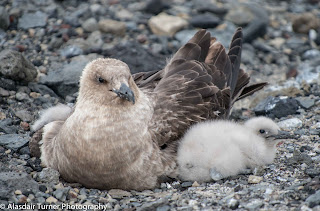 I observed one nest in which the mother bird appeared to be sitting on eggs for many weeks.  Even after all the other nests had chicks running around, this one bird was still sitting on a nest.  I went back to the nest a few days later and got close enough to see that the mother had been sitting on a frozen egg and a dead chick.  I believe she had been sitting there for as long as a month, but would not leave her nest.  This is unusual behavior for any bird, especially one that has a reputation of eating its own young. 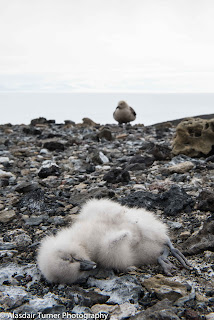 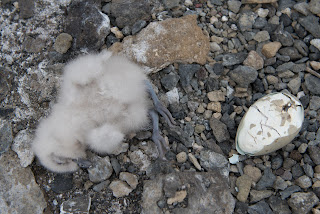 It is important to note that my observations of these birds were done from a long way off and the photos of the birds attacking me were shot when working directly with science groups, or when walking on open trails near McMurdo Station.  As soon as the birds showed aggressive behavior I left the area immediately.  The photos of the nestling were shot with a telephoto lens and at no point did the parent bird react to my presence.   In other words:  No birds were harmed in the making of these photos. 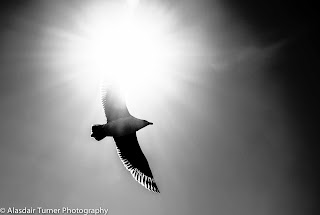