The first of what I hope to be several photos from Antarctica was published yesterday on National Geographic Travelers Travel 365 feature.  It is located here:

The cave was located in the Erebus Ice Tongue near Ross Island, Antarctica.  An ice tongue is simply a glacier that continues past the edge of the land and is floating in water.  This was the second time we had been to the cave after finding it the first time two days earlier.  At that time we did not enter it because we did not have the equipment or time to determine stability and overall safety.  This photo was shot as Cory and I entered the cave and assessed the roof stability.  The original intent of entering the cave was so it could be used as a recreational trip for people working at McMurdo Station.  Ice conditions and transportation issues unfortunately did not allow this to happen.  The New Zealand program did end up using it for this purpose and used it as a side trip on Cape Evans and Cape Royds recreational trips.

The cave and as much as two kilometers of the ice tongue are now gone.  Sometime in mid February the floating tongue broke off and floated out into McMurdo Sound.

Here are a few more photos of the cave. 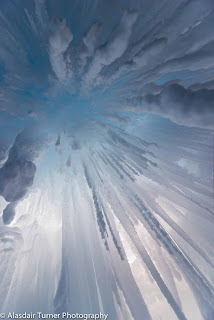 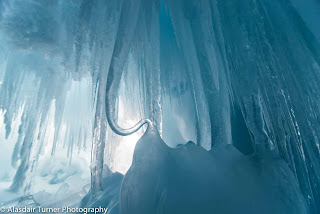 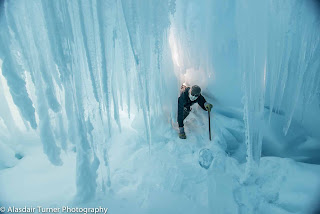 Posted by Alasdair Turner Photography at 11:05 AM