Arresting a crevasse fall is often overlooked and almost never practiced with real weight. At American Alpine Institute we find it important to allow students to practice a real crevasse fall and rescue a real weight. Catching a real person and rescuing them from a crevasse will almost certainly make people take glacier travel more seriously in the future. AAI practices crevasse rescue on two person teams since this makes it more difficult and creates a much more serious situation for the rescuer.

Note: If you are going to go out and practice this in a real life setting it is VERY important that you set up a second safety line in case the fall is not arrested. It is difficult to stop a fall on a two person rope team. If you do not know how to set up a safe backup system DO NOT DO THIS. In addition don't jump in a crevasse with your crampons on or an ice axe in your hand. Give AAI a call and sign up for a day or two of private guiding and have a guide oversee your practice.

The photos below show a two person rope team in which the second person on the rope falls into a crevasse. In our practice sessions the second sits on the edge of the crevasse and gives the rope team leader some warning by yelling falling. They then slide off the edge of the crevasse simulating a crevasse fall. The rope team leader will then arrest the fall by falling to the ground on their stomach and planting the pick of their ice axe into the snow.

Here you can see the second person on the rope begining to slide into the crevasse, and the leader about to self arrest. 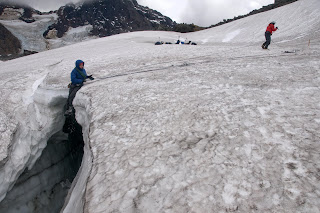 It is very important in glacier travel to not allow excess slack to build up in the rope as the team travels across the glacier. If there is too much slack in the rope between the two climbers then the rope team leader would be shock loaded and have a much harder time stopping the fall into the crevasse. 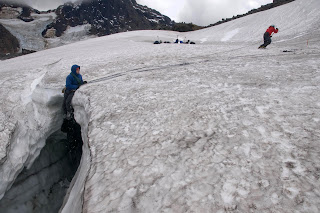 Here the leader falls toward the ground ready to place their pick in the snow. 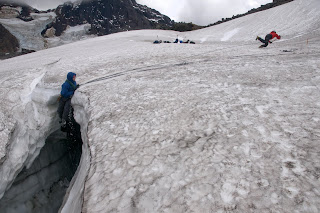 A close up of the fall. 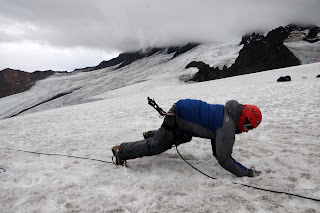 Once the pick is placed in the snow the rescuer used the weight of their upper body to hold the pick in the snow. 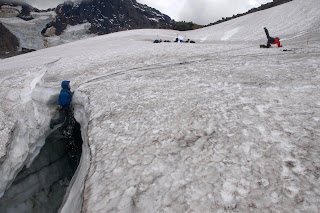 Most of the holding power of a self arrest comes from the legs. The rescuer will not be able to build an anchor if they can not get their hands free. The rescuer must kick the feet into the snow so all of the weight of the fall can be held by the legs. Here the rescuer has arrested the fall and is ready to build the anchor. This is a good time for the person in the crevasse to practice prusiking up and down the rope while the rescuer sets up the crevasse rescue system. 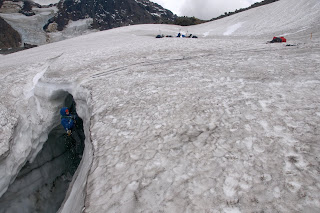 The rescuer after arresting the fall and kicking his feet into the snow. 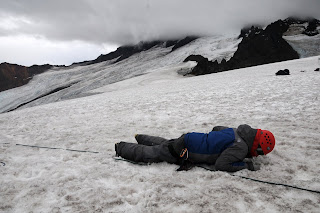 This is the first in a three part series on crevasse rescue. Stay tuned for Part two: Building the anchor, and Part 3: Setting up a pulley system.
Posted by Alasdair Turner at 9:24 AM