On Friday I headed out to Yakima to do some work for WA Fish and Wildlife.  The goal was to put a trail camera near a golden eagles nest.   This is the same thing we did last year on a nest of a different set of birds just down the valley.  There are some photos from that work here.  We did not know if the nest had chicks until we did the long drive on a terrible dirt road to get there.  Once there we found two chicks, and just as importantly, a nest that was not too difficult to get a camera mounted on.  I shot a couple of photos when I was down at the nest.  The female bird was on the nest when we got there, and decided to leave pretty quickly. 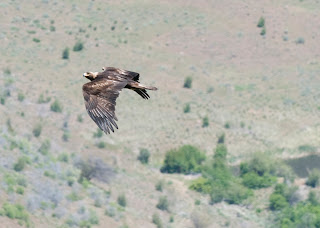 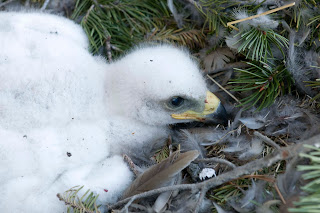 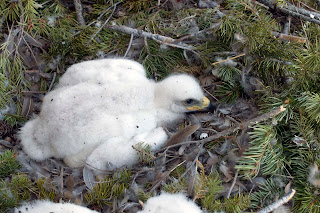 The two birds in the nest.  There is a piece of food next to them which is what is left of a blue grouse. 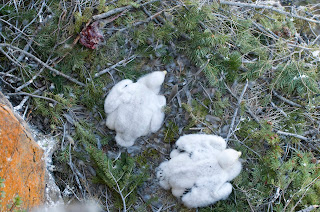 Please note that these photos are shot while working directly with the WA Department of Fish and Wildlife under funding from the Woodland Park Zoo.  There is no other reason to go to golden eagles nests since they are very easily disturbed.
Posted by Alasdair Turner at 8:34 AM